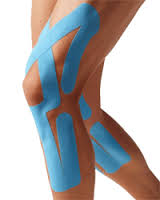 Kinesio tape has many unique qualities. It is approximately the same thickness as skin and shares many of the same elastic qualities as skin. Unlike other athletic tape, Kinesio tape is water resistant so tape jobs can last 3-5 days. In addition, the wave-like adhesive mimics fingerprints and the heat activated glue increases the adhesive quality of the tape. The tape leaves no adhesive residue on the skin. Kinesio tape is 100% cotton.

Muscle function: Kinesio tape has been shown to increase range of motion, reduce fatigue, and reduce muscle spasms. In addition, Kinesio tape can help normalize length-tension ratio and modify the bioelectrical activity to increase motor unit recruitment. Garcia-Muro et al (2009) found in a case report that a Kinesio tape job modified the inhibition of the deltoid muscle. The patient had a myofacial trigger point in her anterior and middle deltoid as well as restricted shoulder mobility. Abduction improved significantly after the tape was applied and increased even more two days later. The different application methods for Kinesio tape normalizes length-tension ratio by either stretching overactive muscles or tightening overstretched muscles.

While Kinesio tape has shown to have a beneficial role in increasing strength, range of motion, and decrease pain compared to other athletic tapes, more research needs to be conducted to confirm these findings. In addition most of the medical literature supporting Kinesio tape is case studies or anecdotal evidence, experimental research is essential for medical staff to ensure that Kinesio tape is beneficial to athletes. However, if you and your medical team decide that Kinesio tape could be beneficial for your injury or condition, try it out and see what your reaction is. Unlike other medical interventions, there are no known adverse effects to using Kinesio tape so see if it works for you.