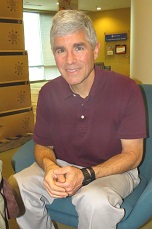 RPI patient, Derek Cohn, was recently featured in an article in the St. Louis Post-Dispatch where he discussed his past problems with back pain, his spectacular recovery, and his positive experience with RPI. Cohn went from fearing that he may never walk again, to competing in several stair-climbing races–one of which included a 108-story tower! During his interview with the Post-Dispatch, Cohn spoke about his rough experience with back pain that was brought on by a 1999 hiking trip in Australia.

After he was diagnosed with stenosis, Cohn opted to go the route of physical therapy rather than having to undergo surgery. Cohn then became a patient here at RPI where he took part in a physical therapy program that was tailored to fit his specific needs, as well as Pilates.The outcome of his treatment at RPI was nothing short of spectacular, as he can now engage in physical activities that he never thought would be possible.
The article also features RPI co-owner and physical therapist,Jonty Felsher, PT, who goes into great detail about why so many people tend to experience back pain, and the various onsets of said pain. Felsher was quoted saying that the reason that most people experience at least some sort of back pain in their lifetime can be attributed to the fact that, “It’s an area that takes a lot of strain; it’s a complicated structure, vertebrae, nerves, ligaments, muscles.”

Click here to check out the entire interview to see why Cohn says that the therapists at RPI, along with his own determination, played such a vital role in his rehabilitation and his ability to purse his new hobby. Also be sure to check out one of our latest articles on exercises to prevent lower back pain.

Sign up to receive the latest Physical Therapy news and information, specials and giveaways.