When 14 year old teenager Justin Skeesick couldn’t train and play baseball competitively because of an intense pain in his pitching shoulder, his parents turned to dry needling. He first had to overcome his fear of needles but his trust in his Dad saw him through.

Justin’s Dad tried trigger point dry needling personally for his shoulder pain, and it worked. According to Justin, “It felt good. It feels like your muscles are cramping up, then they relax.”

There’s a great deal of interest in sports injuries and body pain with the ongoing Olympics 2012 and the competitive nature of humans in finding relief from pain. This has led to a renewed interest in a physical therapy treatment technique known as trigger point dry needling (TDN).

The History of Dry Needling

Trigger point dry needling is a western approach using acupuncture needles that began in 1938 by Professor John Kellgren. He used medical concepts in neurophysiology where by pressure on muscles causes relaxation and pain relief. At that time, the professor used “wet needles” which meant injecting the patient with an analgesic. This did not perform well during clinical trials so the shift was made to dry needles (no medication). Nonetheless, it is anchored on the study of biomechanics and human anatomy from which it draws its credibility.

Today, TDN is a medical technique that requires no injection, no stimulation. TDN results in the relaxation of specific tight or knotted muscles and the reduction of muscle spasms. Janet Travel, an American physician coined the term “trigger points” or Myofascial trigger point (MTrP) for dry needling.

Across the world, those who balk at using non-traditional treatments have welcomed trigger point dry needling because it is based on years of research and concrete evidence. This technique has been in practice in the United States by certain physical therapists for over 15 years. The technique is gain recognition as an accepted physical therapy treatment across the U.S.A. and the globe. In 2012 the Louisiana Board of Physical Therapists added requirements and regulations for the practice of TDN by Physical Therapists.

In an interview with PT Amanda Brewer from Shreveport, Louisiana, “At first I was really skeptical about it. I had never heard of it in physical therapy school, and I’ve been practicing 7 or 8 years.” Nonetheless, she was part of the reason dry needling is now regulated properly in her state. One of the reasons she pushed for regulations was to protect the PT profession and address patient issues such as the immediate relief drawing attention away from underlying long term causes such as weakened or shortened muscles. She says, “The only problem is that needling takes away their pain so well, they don’t want to come back for treatment.”

For the case of Patti Moffett from Bossier City, also in Louisiana, she tried dry needling for her shoulder and neck pain. The surgery she had a decade ago did not bring 100% relief and a couple of years ago, the pain came back. Regular PT manual therapy techniques did not work for her however she said that trigger point dry needling did improve her condition and it was actually less painful than some of the other manual therapy techniques. 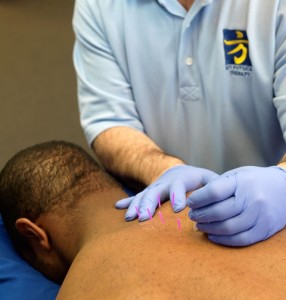 What Does it Treat?

A Description of TDN

Physical therapists (PT) have explained TDN to be an intramuscular physical therapy treatment that gets to the “heart” of muscle pain, the muscle belly. Using acupuncture needles, the PT has to find the trigger points which are knotted muscle fibers that have contracted to the point of pain. The very fine dry needles are inserted into the trigger point and the muscle fibers begin to twitch and contract. After a few seconds, the muscle tissue begins to relax and return to its normal state. This procedure can be risky and State Boards for physical therapists across the U.S. have advised patients to seek TDN treatment only from properly trained PTs as there are risks to TDN if done by non-licensed PTs.

Who should not have this treatment?

Trained TDN therapists are also recommending that anyone with a bleeding disorder, using a pacemaker, or is pregnant should not undergo TDN. Pregnant women past the first trimester could experience labor pains that lead to premature delivery if they undergo TDN treatment.